How Opiates Impact the Brain and Body

It’s no secret that opioid addiction has spread rampant throughout the United States. According to National Institute on Drug Abuse “Every day, more than 115 people in the United States die after overdosing on opioids. The misuse of and addiction to opioids—including prescription pain relievers, heroin, and synthetic opioids such as fentanyl—is a serious national crisis that affects public health as well as social and economic welfare.” More often than not, addiction begins innocently and seemingly without provocation. Prescriptions are often written by primary care physicians to treat pain of all sorts, from bone breaking accidents to chronic pain management. While opiates are proven to subside pain, there are negative consequences to prolonged use and abuse. Leaving the individual subject to potential addiction, the risks can often times outweigh the benefits.

According to ASAM “Drug overdose is the leading cause of accidental death in the US, with 52,404 lethal drug overdoses in 2015. Opioid addiction is driving this epidemic, with 20,101 overdose deaths related to prescription pain relievers, and 12,990 overdose deaths related to heroin in 2015. From 1999 to 2008, overdose death rates, sales and substance use disorder treatment admissions related to prescription pain relievers increased in parallel.” Statistical resources provide overwhelming evidence to support opiate epidemic in the U.S. Opiates are classified as narcotics and act as a depressant, affecting the central nervous system. Ignorance to the stronghold of these medications ultimately lead to dependence and abuse.

Opioid receptors are located all throughout the human brain. Neurotransmitters are responsible for producing communication between the brain and the body, such as opioid receptors. The functionality of these receptors are to act as action sites for pain reduction and induce pleasure responses. When these receptors fire off, dopamine floods the brain and can create a euphoric state. Opiates bind to specific receptors producing a similar effect to the natural chemicals that block out the perception of pain. Opiate produce an effect almost 1,000 times more potent than natural chemical produced in the body and naturally the brain and body adjusts to the new levels. This effect manifests the vulnerability to abuse and dependency. The brain seeks to mimic and replenish the effects that stimulate the pleasure sensories. Receptors become less sensitive to the influx of opiates and a tolerance is established, requiring more and more of the substance. Thus the cycle continues. Prolonged use of opiates and the stress on the brain can ultimately lead to addiction and sometimes overdose.

Opiates depress the central nervous system. This effect can cripple the respiratory system. Ingesting and injecting opiates can slow breathing and ultimately lead to respiratory distress or loss of consciousness. Snorting or smoking opiates can lead to an array of negative symptoms as well. Opiates can be tainted with unknown compounds. Consequently, abuse of opioids can lead to chronic sinus/upper respiratory infections, frequent nose bleeds, and sleep apnea. Over time, opiates can cause severe long term effects on the lungs such as pneumonia and even respiratory failure.

Alcohol/substance abuse, in general, sustains major risks factors in regards to the overall health of the liver. Most opioids contain acetaphetamine, which is known to cause damage due to levels of toxicity. Often times, addicts will combine alcohol or other substances with opiates which reduces the functionality of the liver to process these compounds. If injecting opiates, the addict runs the risk of inducing major liver damage. Synthetic opiates, such as heroin, are typically mixed with other undissolvable additives. The insolubility can block blood vessels, causing infection and even liver disease. Contracting Hepatitis C is also a major risk for the IV user.

Opiates are notorious for slowing and crippling bowel motility. (Motility is the ability of an organism to move freely using metabolic energy.) Often times, this disorder is referred to as Narcotic Bowel Syndrome. NBS describes the dysfunction of natural bowel function due to an influx of narcotics. Common side effects include nausea, bloating, constipation, abdominal pain, and sometimes gastrointestinal bleeding. This disorder flares up once the narcotic effect wears off. Eating can sometimes lead to further complications and aggravate the symptoms. Opiates are known to cause decrease in appetite which can also lead to malnutrition and weight loss.

Opiates are naturally depressants, and the effect on the heart is no exception. As the opiate reduces the function of the central nervous system and the cardiovascular system, the heart’s function is also slowed. This effect can lead to dangerously  bradycardia, low blood pressure, vasodilation, and edema. Prolonged use of opiates can cause a disorder that defects the electric conduction of the heart, ultimately creating disabling rhythmic conditions. Heart cells can also be damaged by a number of compounds found in prescription opioids. Injecting opiates can lead to infectious endocarditis. One of the most common disorders associated with opiate abuse, heart valves and heart structures are overwhelmed with a deadly infection. Treatment options can relieve symptoms but often times lead to chronic cardiac disease.

Withdrawal from opiates can cause many complications as well. The body becomes dependent upon the increased levels of opioids. Medical supervision upon detoxing off opioids is recommended. Common symptoms of opiate withdrawal include:

Prolonged use and abuse of opiates is detrimental to the body. Addicts abusing opiates are at a much higher risk of premature death and serious health complications. As the individual’s tolerance increases the negative effects on the body increase as well. The deleterious effects on the human body can create chronic and even fatal consequences. Psychological effects of opioid abuse can last for years which is why therapy and supportive resources are quintessential to maintaining long term sobriety. The only way to relieve these symptoms is total abstinence. As addiction plagues the U.S. more treatment options and resources have become readily available for any addict struggling to achieve sobriety. Recovery is an all encompassing lifestyle that requires rehabilitation for the mind, body, and soul.

Sunshine helps you set and reach your personal goals and live a life free of darkening constraints.

Here at Sunshine Sober Living, we believe in integrating new and healthy activities for our residents. Many of our residents have either neglected or never truly learned the fundamental life skills that cultivate a fulfilling and self-sufficient life. Sunshine Sober Living has created a community platform of creativity, innovation and responsibility in hopes of helping our graduates to achieve a life beyond their wildest dreams. 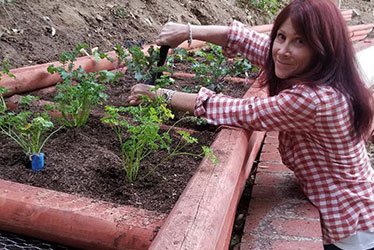 We are anxiously looking forward to the first crop that we will have from our newly constructed vegetable garden.

We encourage the talents of all our residents in Music and the Arts. The results as you can see are often excellent!

You would be surprised in the work that goes into making a simple short video.

Hands on projects like rebuilding computers are only one of our many activities. Need one fixed?